There were only a few changes between the 2008 and 2011 season from the 2007 helmet design.  In 2007 the Gophers had a slightly lighter shade of maroon helmet paint than previous season.

The 2008 to 2011 helmets went back to a darker maroon and added gold flake to the paint.  This is the first use of the gold flake in Gopher helmets.  The helmet decals remain largely the same, but the US flag decal now has a white border around it.  In 2009, the US flag lost the border outline.  Minnesota was on the back helmet bumper, and Gophers was on the front bumper.  The Gophers wore a special ribbon decal to the right of the State of Minnesota decal vs Iowa on Nov 21st, 2009.

The 2010 was the same as the 2009 helmet, but saw the introduction of the white alternate helmet with gold flake paint.  This marks the first ever white helmet with brick M to ever have been worn.  These helmets were only worn on Oct 9th vs Wisconsin, and Oct 16th vs Purdue.  The decals are the same with the exception of the Big Ten flag now being maroon instead of gold so it would show up better.  The Gophers sold a limited number of these helmets and we acquired a half dozen of them.  The vast majority of those released did not have numbers in them so have no player identifiers, but we were fortunate to pick up a Jon Hoese and the late Gary Tinsley's helmets.

The 2011 helmet had a few changes from the 2010 helmet, and white helmets were no longer used.  The 2011 helmet added a heavier gold flake to the paint, the State of Minnesota sticker use was discontinued, and the Murray Warmath memorial decal was added in roughly the same place as the State of Minnesota decal.  This is a black circle with white letters and numbers; M W and the years he coached at Minnesota '54-'71. 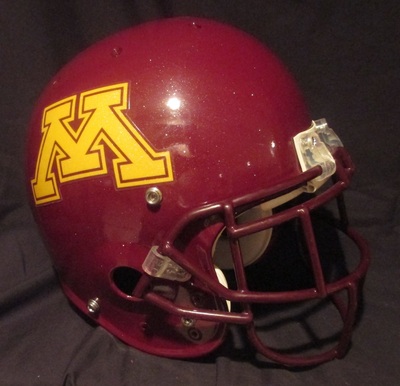 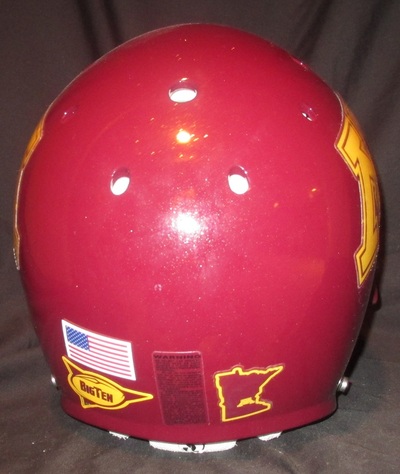 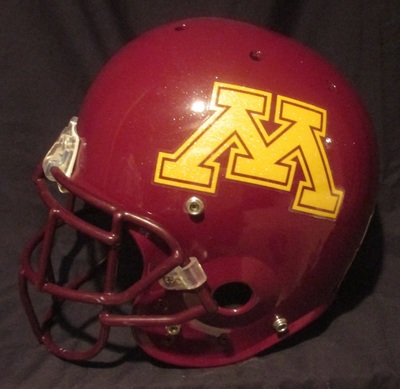 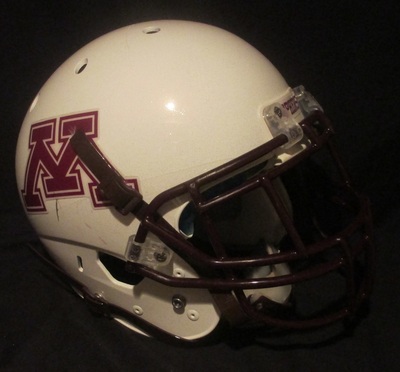 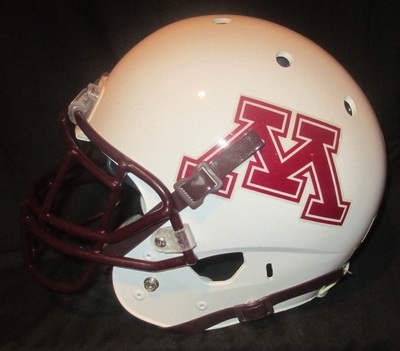 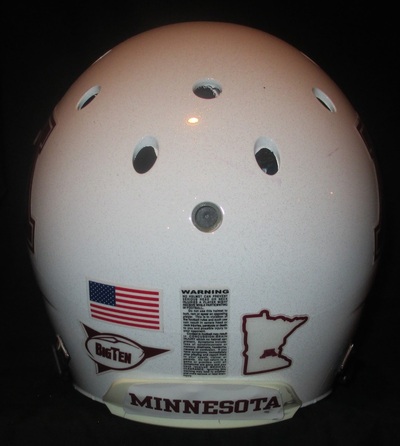 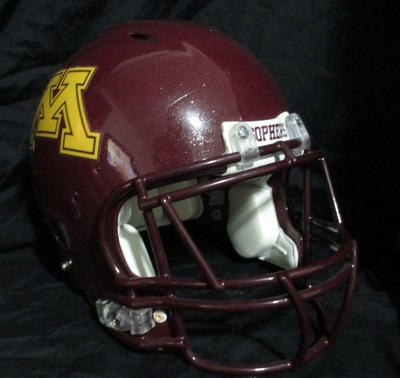 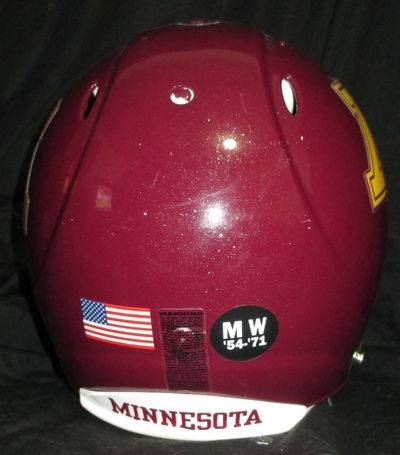 The year 2008 brought big changes to the Gopher uniform.  The jerseys were much different than the 2007 jersey, which was the last of the classic style worn during the Mason era, and the first year of the Brewster era.  Minnesota stayed with Nike jerseys, but began the use of the new, tighter fitting, dri-fit material.  The Gophers stayed with the maroon home, white road, and gold alternate jerseys (not worn in 2008, but in 2009-2011), but stylistically, they were different than previous years.  The Minnesota across the chest was one of the few design elements to stay from the gold alt of 2007, but piping, which started on the back shoulder and wrapped it's way down, around the waist area and down to the back tail was now used.  The white and gold alternate jerseys both used the same maroon piping and number colors, white the maroon jerseys went with gold piping and number colors.  These jerseys also lost their shoulder numbers and now only had numbers on front and back of the jerseys.  The white and maroon jersey numbers were maroon with a thin white border, and gold border around that.  The maroon jerseys had gold numbers with a maroon border, and a white outter border.  There are a few ways to differentiate between the seaons to tell which jersey was worn and when; The 2008 jesey had a Big Ten flag patch with just Big Ten on the patch.  The 2008 jersey also had the Insight Bowl patch worn during the bowl game on a maroon jersey.  The 2009 patch changed to include Big Ten with Conference under the Big Ten on the flag.  2009 also saw the use fo the special TCF Inagural season patch on only the maroon and gold alternate jerseys, but not the white.  The 2009 also had the same Isight Bowl patch as used during the 2008 bowl used during the bowl game, only this time on a white jersey.  The 2010 jerseys dropped the Big Ten flag patch altogether.  The 2010 and 2011 jerseys are indistinguishable.  Unless you obtained them during a certain point, it's otherwise impossiblee to know which season they were worn.  The few jerseys made available for sale during the 2013 spring game were from the 2011 season.

The pants worn during this era were maroon with a yellow swatch of color, white, or gold, both of which had a maroon swatch of color.  Each pants also had a brick M whose color matched the color swatch and piping color. During 2007, the Gophers wore white socks with maroon and white Nike shoes.  They stayed with the 2007 combo in 2008 and 09.   In 2010, the Gophers wore white socks with black and whtie Nike shoes.  2011 saw black socks with white and black Nike shoes. 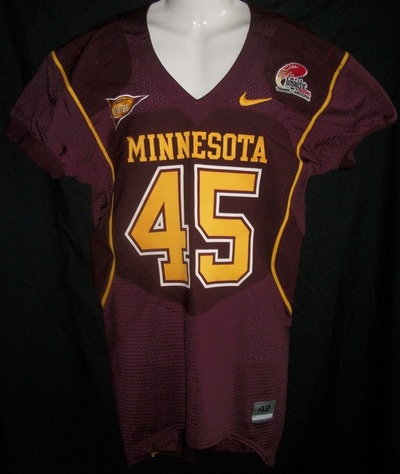 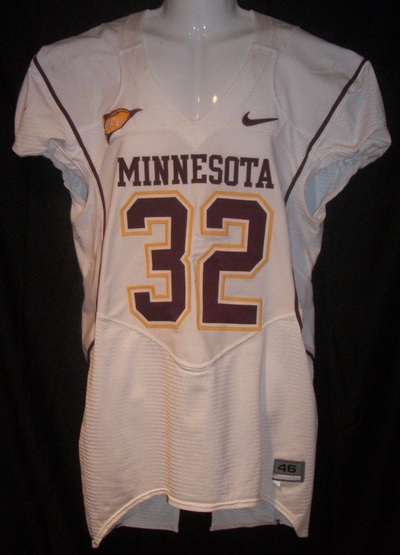 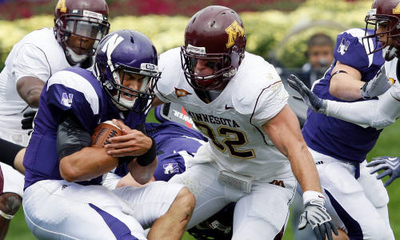 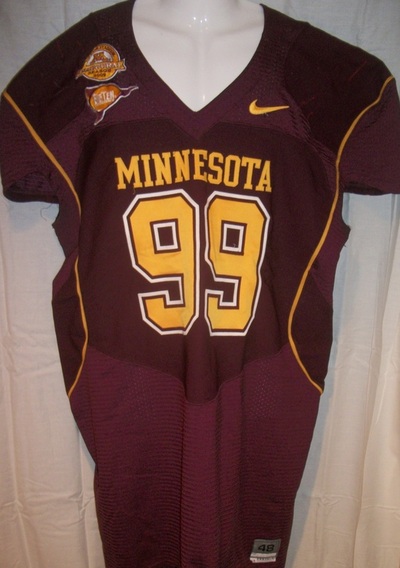 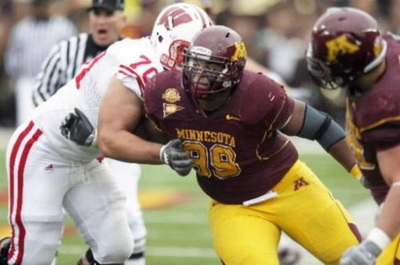 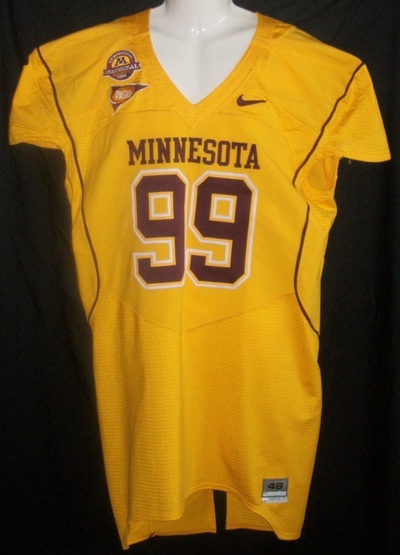 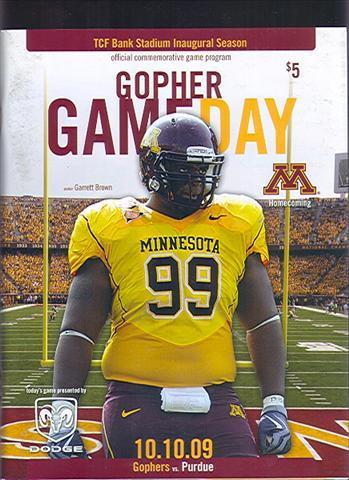 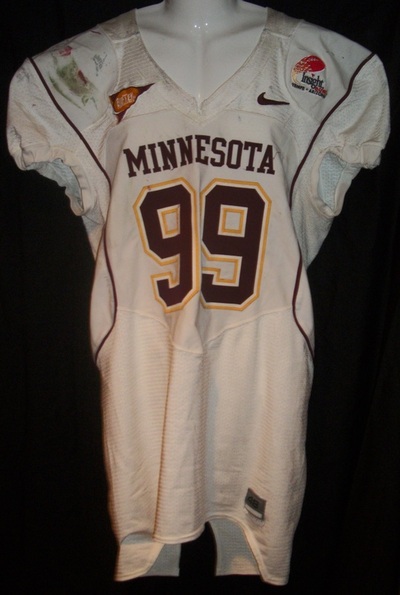 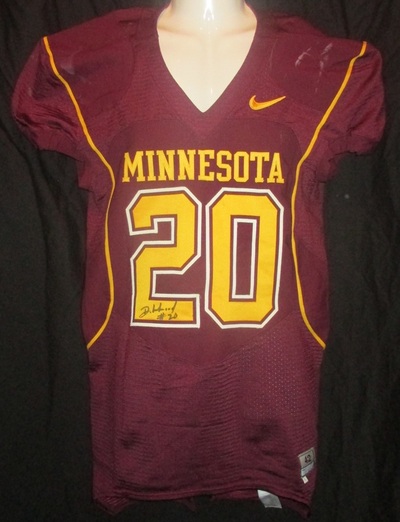 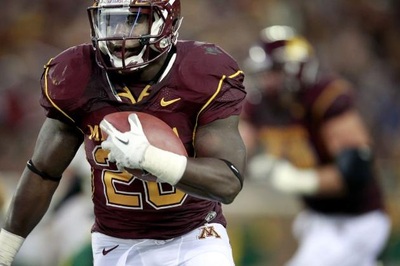 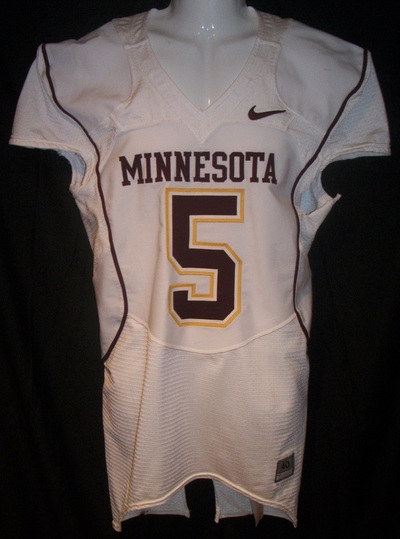 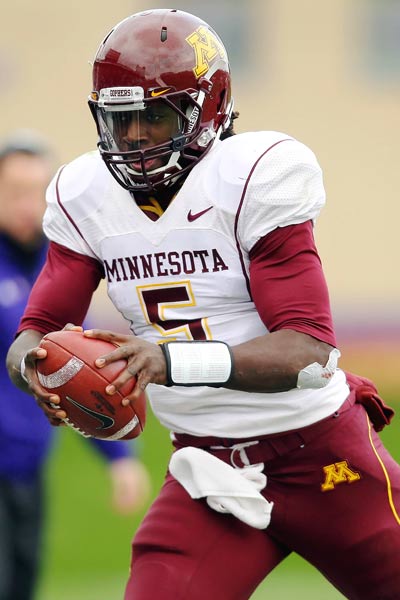 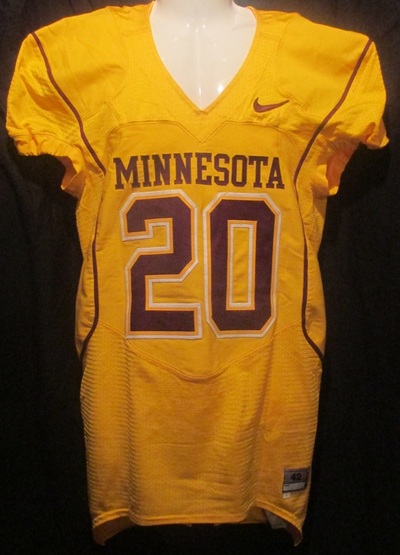 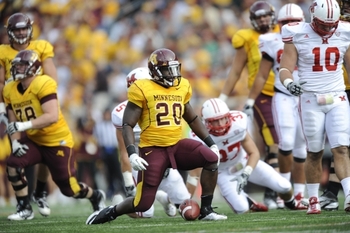