The Gophers helmet changed markedly in 2012, with the most noticable change being the switch from the ultra sparkle of 2011 to the flat, matte, maroon of 2012.  The helmets also sport new black facemaks, jawpads, and front/rear bumpers.  On the front bumper is the Gopher's brick M, and on the back bumper Ski-U-Mah.  The number font style matches the jersey.  The Gophers also changed style of American flag decal now using one with a white outline around the flag.  The M decal on the side of the helmet is of the same basic design and size as 2011, but loses the clear plasic outline around the M that was used in 2011.  The Gophers used two special helmet decals in 2012.  The first was used while playing Purdue and was a US flag ribbon and was worn to support the troops, and the second was worn while playing Michigan as was a puple ribbon to support epilepsy (see link) http://detroit.cbslocal.com/2012/11/02/gophers-to-help-raise-epilepsy-awareness-saturday-against-michigan/.

The 2013 helmet was the same as in 2014, but a USA flag brick M decal was worn vs Penn State on November 9th for the Salute to Service day. The purple epilepsy ribbon was used again, this time vs. Nebraska on 10/26.  On December 27th, the Gophers unveiled their new white alternate helmet for the Texas Bowl vs Syracuse.  The player #s is on one side of the helmet with a maroon brick M on the other.  The brick M remains on the bumper, although in white, not gold, and brick by brick in white print is on the back helmet bumper, with a maroon weathered brick pattern center helmet stripe.

In 2014, the maroon helmet stays the same, but with the addition of the Bob McNamara memorial decal on the back of the helmet.  The white bowl helmet design has been retired, but a new gold alternate helmet with be worn this year (dates upcoming). 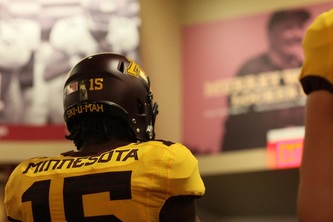 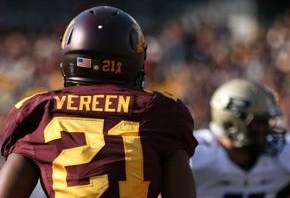 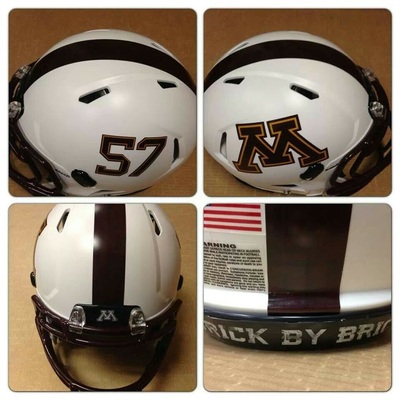 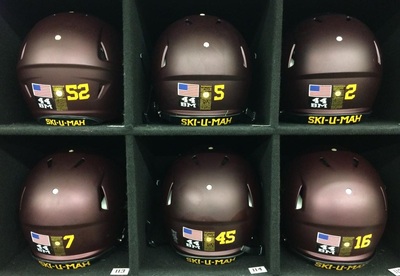 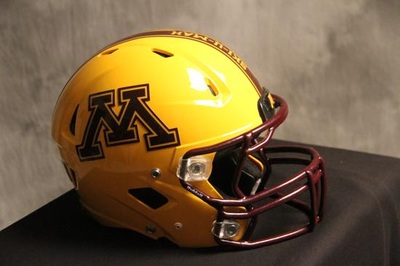 The Gophers uniforms also changed dramatically in 2012.  The Gophers stayed with Nike and the maroon home, white away, and gold alternate jerseys, and also went with the same color pants, but switched the combinations of jersey/pants colors from game to game.  The biggest differences in 2012 are the font style and brick pattern reminisent of the 1940 National Championship team jersey font, and the brick pattern to honor the old "Brickhouse" or Memorial Stadium.   The brick pattern was only used on the gold alternate and white away jerseys and not the maroon home jerseys.  The new/old font also applies to the names on the nameplates on the back of the jerseys, but these also do not have a brick pattern to them.  Here's a video link for the official uniform info;
http://www.youtube.com/watch?v=ahMrRPzkSyY&feature=player_embedded  The Gophers also used the new B1G patch, and the GT51 or Gary Tinsley Memorial patch to honor the late Gary Tinsley.  During the Car Care Bowl, the Gophers added a bowl patch to the left chest/shoulder area.  The new jerseys definately fit tighter than the previoius jerseys and run smaller in size as well.  The Gophers wore black Nike shoes with black socks during the entire season.


The 2013 uniform remained the same as the 2012 uniform, although the Gary Tinsley memorial patch wasn't worn.  The bowl jersey v Syracuse was maroon with white pants with the Texas Bowl patch.

The 2015 Uniform was the same as the previous few seasons, with the exception of the addition of the anthracite coal gray colored jersey. 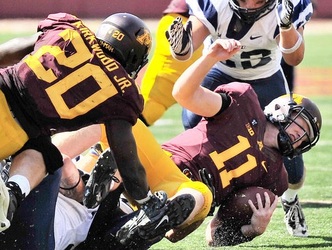 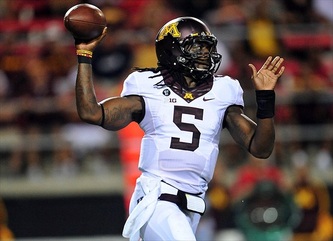 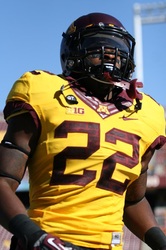 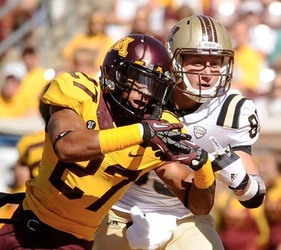 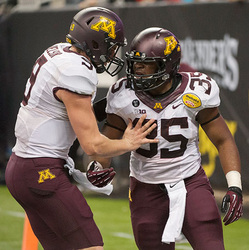 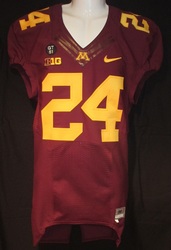 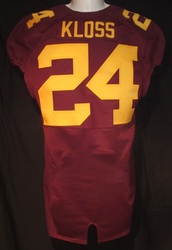 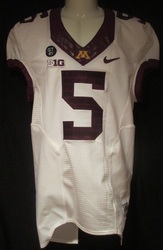 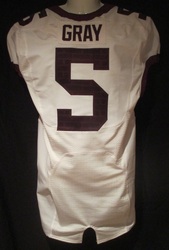 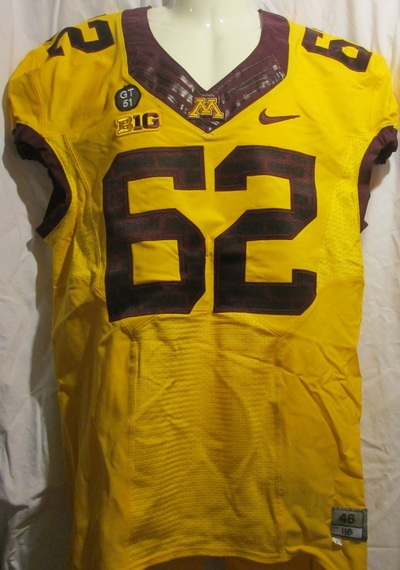 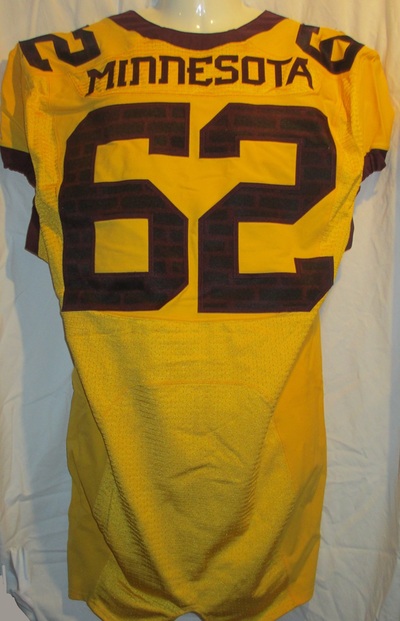 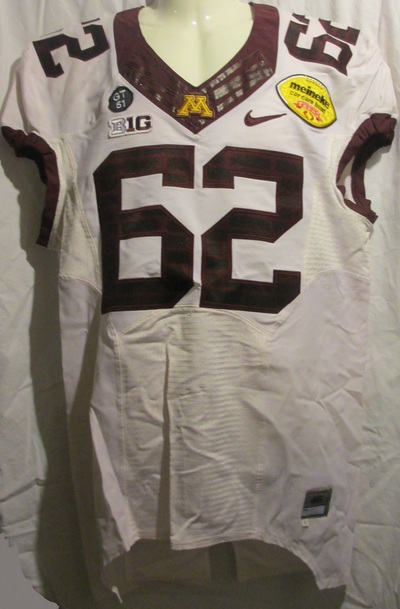 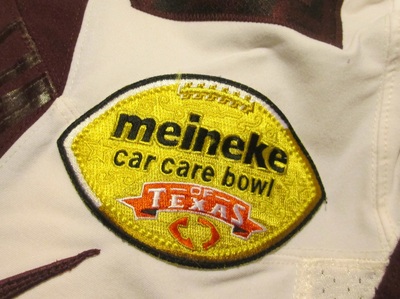 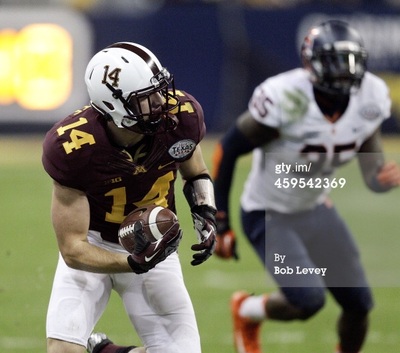 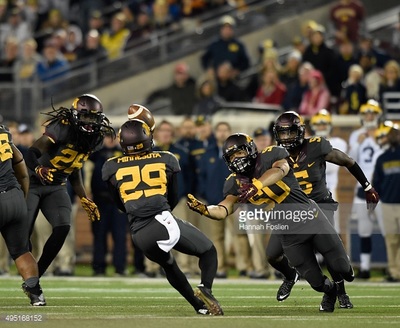 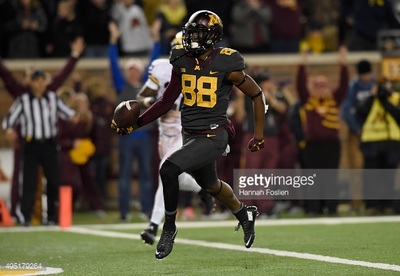